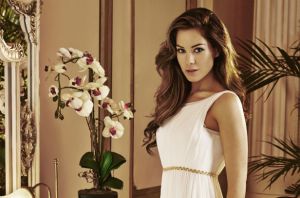 SciFi Now UK spoke with Dominion’s Roxanne McKee. Interview excerpt is below. Dominion will premiere in the UK on Thursday October 30 on SyFy at 10 pm. We will be tweeting along with cast and fans during the UK premiere.

With a second season already in the bag, Syfy’s show Dominion (based on the film Legion by Scott Stewart) has been a huge hit in the US. Now, we’re finally getting to see it here in the UK.

It’s set in a postapocalyptic future in which humanity’s last survivors are at war with angels (yep, angels) who want to wipe them out once and for all. Roxanne McKee (Game Of Thrones) plays Claire Riesen, the daughter of Vega’s ruling Senator (Alan Dale) and next in line for the throne. She’s had a privileged upbringing, but her love for Alex (Christopher Egan) could change everything…

SciFiNow spoke to McKee about why she was drawn to the character, what gives Dominion its edge, and what she wants to see in Season 2.

Had you seen the movie Legion before you were approached for Dominion?

I didn’t actually. I read the script and then went to the audition and it wasn’t until after I got the part that I watched the film.

That film’s pitch is essentially “Angels with machine guns!” How was the series sold to you?

So it wasn’t so much sold to me, more that I just read the script and I really enjoyed it and I enjoyed the multi-faceted dimensions of the script. I felt like it was something that would appeal to a lot of people. I know it has a cult feel to it but I think it’s an intelligent idea and there’s room for a lot of expansion in future series and that was something that was very appealing to me, and also the nature of my character was obviously exciting to me as it’s a real coming of age story for her and she’s very human and very, very real and although the show is fantasy, it’s rooted in reality and I think my character is one of the most real characters.

This series is set some years after the war has started and there’s some political scheming going on among the human survivors. Was that one of the elements you were drawn to?

Yeah, I’m absolutely drawn to political scheming. I’m hoping to be prime minister one day! [laughs] It was interesting, yeah the political intrigue development was something that I hoped for and it’s certainly come about and I feel that’s an interesting journey as an actor to explore given the nature of the world that we’re living in at the moment. And so yes, that was very appealing to me.

What can you tell us about your character Claire?

So her father is General Riesen and she’s kind of like a modern day princess, or rather a futuristic princess, she’s the closest thing that Vega has to a princess…I think that’s the by-line that people are using for her! And she’s grown up with wealth and prosperity and protection and relative comfort given the circumstances of the world that they live in. She goes on a self-awakening throughout the series and she falls in love and you see this young innocent girl turn into a political animal and you as the viewer hopefully understand why.

And you understand the progression of her character and I think that one is able to relate to that and everything that she goes through. Because she goes through some hugely harrowing experiences and obviously when that happens in life that changes you as a person. And I think that’s interesting to see why she becomes flawed, I guess, I think that’s what people’s perception of her would be at the end, she becomes darker than she is at the beginning and in a sense flawed.

Your father is played by the amazing Alan Dale! What’s it like working with him?

Not only is he an amazing actor, he’s an amazing human being. He’s got a really dry sense of humour and I love working with him. We get on like a house on fire, he’s very naughty, very, very naughty but he’s incredibly funny, incredibly dry and I had lunch with him the first day I got to South Africa and he was talking about relationships and we ended up in this deep discussion about relationships. From the get-go, I just find him very interesting to talk to and just hilarious. I don’t know whether you’ve ever interviewed him, you should, he’s really down to earth, and he’s really genuine and what you see is what you get. He’s just great.

For the rest of the interview please visit SciFi Now UK.